So the smear campaign against beards is upon us. I keep coming across these articles like this one that makes the claim, (without reference to an actual study,) that beards contain more germs and bacteria than a toilet, that is before your uncle Andy comes over for his morning coffee and bowel expulsion.

The most glaring mistake in this smear campaign is that they don’t make a note of where all that poop and bacteria would go if you didn’t have a beard. That’s right ladies and ladies with adams apples. Right into your mouth. 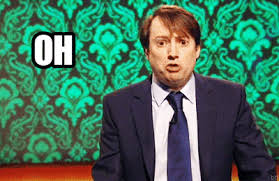 This shortsightedness leads me to speculate about the origin of this smear campaign. Like some beardless sap who had his dream girl whisked away from him at the hands of a much more handsome and healthy man again and again only to lash out because his face is stuck in prepubescence and now the only thing he can do is literally eat, breath, and talk shit.

After months in Gitmo Bay I was finally able to hustle my was out using only a toothpick and some dental floss, (Those guards have some really bad teeth,) only to find myself in the middle of a zombie apocalypse. My time away was certainly my darkest hour, but during that time I was imprisoned with a stoic of the highest order. He taught me to rely only on myself and do what is right no matter what. He also taught me to drink my own piss and to use my beard as a filter. At the time I found some of his teachings odd but his survival techniques will serve me well in this new dystopia. I hope to see you all soon, that is if its not to laaaaaaarrrrggg……….

Well its finally here.  A whole year of beard.  52 weeks of follicle fantasy. 12 months of twisted whiskers. All culminating to this one point in time. Yesterday a friend of mine complimented me on my beard and said he was quite jealous. Which made my year, for him and his brother are known for growing quite luscious beards. Of course all that pride came to an end while my brother came to visit this afternoon.

I had asked my brother to join me on this occasion to commemorate the cultivation of these fine spectacles. 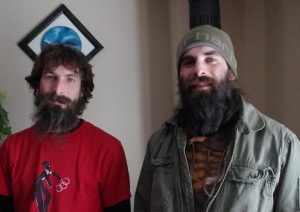 As you can see my beard still pales in comparison to his massive face muff,  (and he just shaved yesterday.)

So now what? Do I face dejection of in-superiority and shave my face in shame or  do I embrace what I have grown and build off of it? Before I answer that question I have to do a little retrospection. A beard in review so to speak.

I started this beard as a parody to Movember and that has opened the door for the Ausies to steal my month and rename it Decembeard, where they are raising money for bowel cancer, (fitting actually.) It has been an interesting year non-the-less, I’ve been through mountains of madness that almost ended my life as I know it, watched hipsters hijack a fashion trend that pushed beards to the brink of blasphemy, I dealt with my own inner demons as well as the worlds outer demons and now on the brink of another Brocember I ask do I shave my beard? How could I when I know Santa is still out there torturing and corrupting young elves. So I say Nay.  This Brocember the Beard must go on!

About 11 months ago I decided growing just a piddly mustache is not enough. To show your true manhood one must grow a beard. So I started to think of bearded figures that needed attention and came right to old St. Nick. Saint indeed, ha. My intention was to grow a beard for all of December (Brocember) to bring awareness to Santa’s horrific ring of elvish slave labour. But it became more than that.

I decided to grow my beard for an entire year. I tracked Satan Clause through the off season and found him making back door deals with Chinese business men. Taking orders from underground elf trafficking rings and even found him lurking among hooded figures at some kind of ritualistic seance involving a caribou, an egg beater and a 30 pound tub of KY jelly. I was appalled to find these truths about Santa. I knew he was anything but jolly when I met him last year but these shady business deals and sick rituals have got my whiskers in a knot. I’m setting out to expose the Santa Clause Lie and I won’t be doing it on my own this year. No this year we have a new hope.

Mark, Carl and I will be teaming up using the force to force feed candy canes so far up the fat mans ass that his farts will smell like peppermint for a month. So if you oppose elvish slave labour and greasy pedophile mustaches I encourage you to start your beard now so we can sweep through the streets like an army of bearded brothers (and sister) exposing the lies of Christmas past and freeing the elves of the future from the sadistic clutches of this man made myth.

Forgive me if my content is slightly dated, I’m trying to distance myself from the hipsters. A lot has gone on since my last blog post. I crawled back from dark side to find myself back in the mountains of coastal BC. The madness was strong but the mountain air has cleansed me of shear insanity.

I learned how to survive out here when supplies are low and wifi is shoddy. Thanks to incredibeard I’ll never be without dishes again.

I also learned that you can’t live on happiness alone. (That sentence is much funnier if read with a French accent.) No matter how much joy you bring others some times happiness is not enough (*snicker, sorry I’ve been away from my lady for some time now.) I’m trying to give props to the late great Robin Williams. If there was ever a better beard in any of his oft shaven rolls, Jumanji takes the cake.

Though even the fan favorite Genie sports a quaint gotee. His bout with depression hidden by an array of fake smiles and a bowl full of ramen noodles, I mean laughs, left us all shocked. But his hidden illness enriched our lives and filled our hearts. And sometimes a growing heart is more important than growing a beard. 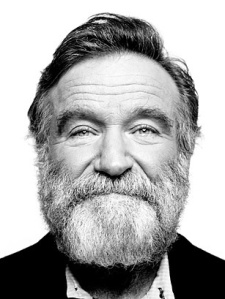 It’s been over nine months since I shaved. That’s like growing a baby on your face except I’m less sweaty and better looking. It is time now to be delivered from the dark side.

No new art from me but here are a few from a occasionally bearded fellow artist Tom Dean.

These are a few new paintings, just until I get some more up. I will be starting an etsy account soon and will link here when I do. Interested people will be able to buy my original paintings from that site when it’s up and running, but enjoy these for now.

They say evil doesn’t sleep, but I’ve managed to wrangle out of Carl’s deadly choke hold long enough to post this.

Carl has entered the darkside. Not only do they have cookies and bacon but now they have beards too, but maybe not for long. It shall be an intense inner journey to keep Darth at bay.

I’ve anyone reads this please help. Carl has gone raving mad. I tried to shear him off but to no avail. I suggest strategic military opps. I’ll keep you updated if I can.

the beard must go on

mybrothersbeardmachine
Create a free website or blog at WordPress.com.